Part of this past weekend was spent in utter frustration. This is partly due to two people using two different programs to organize our pictures with neither of us really having learned the programs. Add to that different versions of each program on different computers, and you can imagine the trouble we made for ourselves.

Of these, I selected the pictures most representative of our trip, from the time we picked up Popeye at the factory on Sept. 20th until the end of the year. I put those 216 photos into a separate album and created a web album of these.

Since these pictures have never been made public, I thought it would be fun to display 20 or so here, and if you like what you see, move to the right column and click on the link to my web albums. There you are free to view all 216. Enjoy!


The lighthouse at the top is located at Cape Disappointment, at the mouth of the Columbia River on the Washington side. We made a circle tour of Oregon, before returned to the factory and picking up our dining room chairs, which needed to be reupholstered.

This next picture was taken en route to Nevada. From there we went through Arizona, New Mexico, and stayed in Texas for the rest of the year. Therefore, the remaining pictures were all taken in Texas.


Who would have guessed that downtown El Paso has such great art? We had never been downtown in this rough and tumble city, and found much to our surprise.


Our next stop was at the Caverns of Sonora, really out in the middle of nowhere! This is a great place to stop for a private tour of these amazing caverns. They even have an RV park with hook-ups.


Next stop? San Marcos Texas. Actually they have a nice walk along the Colorado River, but this public building sits in the middle of the town square.


Here's a view of the inside of the Capital Dome in Austin. One word of caution: If you park on the streets under trees after dark, be prepared to wash your car, that is, before you drive back from where you came!


This photo of Carp was taken at the Zilker Botanical Gardens in Austin. A neat place to visit if you've never seen it.


After visiting with family in Plano (I'm sorry, but it's an ugly city for pictures!) we parked in Kemah, which is more or less between Houston and Galveston, which makes a good base for sight seeing. Of course we went to the NASA Johnson Space Center!


We came across this interesting Quilt Museum in Galveston. Much to do and see, although the town probably doesn't look as good as my pictures since Katrina.


An icon of Houston, there was much to do and see here. We got a fabulous tour of downtown, and without further commentary, here are a few of my favorite pictures:


Here's a picture of the opposing ferry as we crossed over to Port Aransas. This was a great vantage point for visiting Corpus Christi and the surrounding areas. Would you believe the ferry ride was free!


I found this display inside the USS Lexington. We visited way too many battleships to show here.


How about a view of the beach and Gulf of Mexico?

Naturally we visited San Antonio on our way back. A favorite city that also has a Central Market!

This was taken at the Lyndon Johnson Ranch, and is the resting place for President Johnson. Lady bird was still alive and living on the ranch when we visited.


Finally, we visited all the missions, beginning with the Alamo. I think this may be Mission San Juan, one of the last missions on the chain. They are all beautiful and we're glad we were able to see them all. If you want to see more, just click on the link to the web albums to the right and visit Popeye 2006.
Posted by Honey and Bob Shellman at 8:51 AM 4 comments:

Catching up on the Spanish Govenor's Palace

Today I posted our visit to the Spanish Governor’s Palace on December 5th. It was built to protect mission San Antonio De Valero, aka The Alamo and was the seat of Spanish Texas and the capitol building of the Spanish province of New Spain in 1772.

This is a real treat. Be sure to look at the Archive on the right for December 5th to see this treasure. Daughter Julie told us about how they were taken with it on their visit to San Antonio last March. We had never heard of it, and are we glad we had a chance to visit.

After leaving San Antonio, we drove over 1,000 miles in two days to get to Tucson, our favorite city in the southwest.

Coming up next: Visiting with friends in Tucson, Arizona.
Posted by Honey and Bob Shellman at 5:44 PM No comments:

Hi everyone! Just a quick blurb to let you know that our post of the River Walk in San Antonio is now complete, and dated December 4, 2008. We actually were there both on our anniversary after visiting Mi Tierra on the 3rd, and again on the 4th. Too many things to see and do!

Friday it felt like we were on the road again. We were up before dawn and got home after the stars were out. Tax seminar time! This is how I get behind on my posts. Leaving The Popeye Express prior to sunrise and returning with the stars day after day leaves me too tired to do anything but hit the bed when we return; that is, after a little time with the kitties.

Soon I will have the Spanish Governor's Mansion posted. It's an awesome place and if you haven't seen it before, be sure to do so when you next visit San Antonio!
Posted by Honey and Bob Shellman at 5:45 PM No comments: 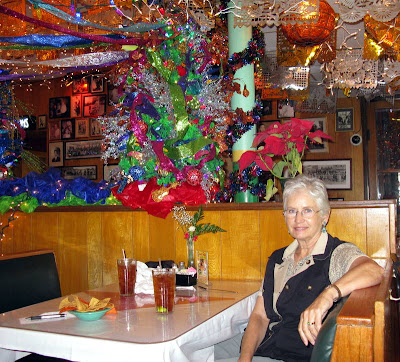 The above picture was taken on our 31st wedding anniversary. The blog was just posted and dated on the actual day, December 3, 2008. I included this picture as I wanted to show you the trees they have everywhere in the restaurant. The decorations are nothing short of fabulous!

The next post will be of the River Walk, taken both on the same day and again on the next. We have lots and lots of pictures - too many in fact! Of special interest, was the visit to the Spanish Governor's Mansion. I'll have a separate blog on that.

However, tomorrow is the start of reality. Bob and I need to get up before the sun and drive to Del Mar for a tax seminar. I hoped to get more done, but getting ready for the tax filing season is a big job. After tomorrow, I'll try to get at least 1 blog done every few days until all our 2008 trip is posted.

Bob joins me in wishing you all a blessed New Year with good health, and if asking for prosperity is too much, at least maybe we can hope for a little financial security! The Kitties wish you all happy "meows."
Posted by Honey and Bob Shellman at 5:43 PM 1 comment: