Off to meet a celeb!

As I sit at my computer waiting for the IRS and FTB to suck the money out of our bank account, I thumbed through the pages of The Milepost and came upon the small town of Talkeetna, AK. Now this is a town with character! We immediately called and made a reservation for a week, which will encompass the 4th of July and includes a jet boat ride on the river; ditto an airplane ride over Denali National Park.

But the story gets even better. It seems this small town of somewhere between 700 - 900 (but who's counting?) got fed up with politicians; and boy, do I ever relate to that. So, they had a write-in vote for the Mayoral election, and the winner is: Mayor Stubbs.

"Palin may have a political reason for opposing cats. According to a letter sent to the Palm Beach Post, it seems that the residents of Talkeetna, Alaska - who the Wikipedia tells me is the inspiration for the fictional burg of Cicely, as depicted in the teevee show Northern Exposure - chose a cat named Stubbs as their official mayor. Stubbs has executive experience, hunts prey with his bare paws, and does not bilk the taxpayers of Alaska out of money for fake per diem expenses, like Palin does. Stubbs the cat hangs out at Nagley's General Store in Talkeetna, with a bunch of other cats, all of whom have been thoroughly vetted, by actual veterinarians.”

The above quote comes from a blog written September 10, 2008 by Doc 40. Where this quote originated, I have no idea; but loved Mayor Stubbs qualifications and his vetting! We did, however, confirm the story when the lady at the Talkeetna Camper Park called to confirm our reservations. 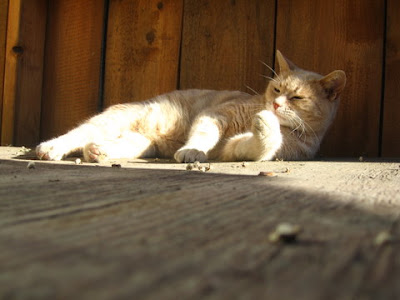 The above picture was downloaded from a website containing pictures of Denali National Park. Sorry, but I really don't know who to credit.

We'll be northern bound in 13 days - soon I'll be counting the hours!
Posted by Honey and Bob Shellman at 5:28 PM