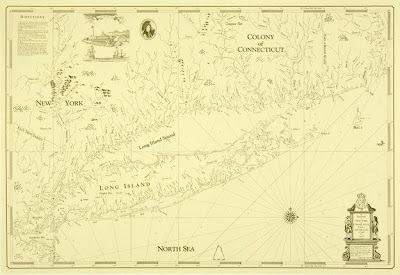 We're spending the night at the Foxwood Casino, located just off Hwy 2, roughly between I-95 and I-395 in Connecticut on our way to Maryland. This makes for a good overnight stop and a nice dinner.

Now in the casino dining room, our table has a place mat which is a map of Connecticut, Circa 1625. It has occurred to me in several places visited, that when America was colonized, the English, having no imagination just named everything as it had been, but put "New" in front of it: New England, New Jersey, New York, etc. The French weren't much better. They just named places after people: Champlain, Montpelier, Barre, etc. I can't find a picture of the map I'm referring to, but the picture above taken off the Internet, will give you an idea.

Of course all these places were named centuries earlier by the Native Americans, who as I was taught, recorded their history in dances, story telling, and song. So I'm sitting here looking at this map wondering who on earth came up with names spelled Menunkatucks, Quinnipiacs, and Paugussetts? Should I blame the English or French, and how in the world are they pronounced? Off to Washingotn DC!
Posted by Honey and Bob Shellman at 8:27 AM

I love Foxwoods! Haven't been in a while. Hope you made a buck or two on the slots!