August 12 takes us on a day trip to this heritage site on a hill overlooking Green Bay WI. It is a State Historical Park consisting of 48 acres & 25 restored buildings. Many have docents wearing period clothing which make the visit all the more enjoyable.

Known as the “LaBaye” area, it was a logical place for trade, situated between the Mississippi and the St. Lawrence Rivers. Voyageurs from Quebec came down in their canoes in the spring with cargo of French trade goods. The Indians needed flintlock muskets, gunpowder & shot, while the Canadian’s needed furs, food & companionship. This led to marriage between the Voyageurs, not highly regarded by Canadian women, and native American women, which grew into the Metis culture. Apparently it was a mutually beneficial arrangement. 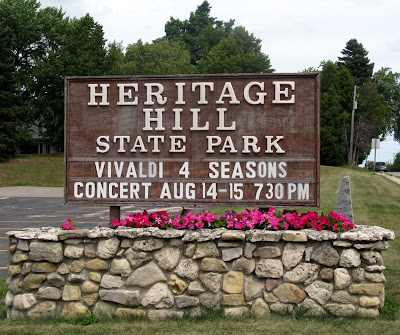 As you can see from the sign, many community events are also held at this facility. What pictures don’t show is the maximum security prison right across the freeway & the Green Bay Packers stadium to the east. 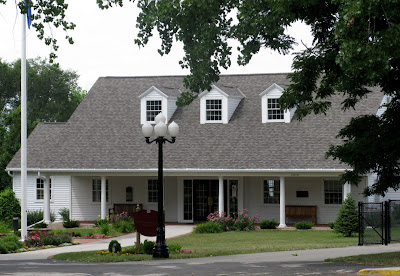 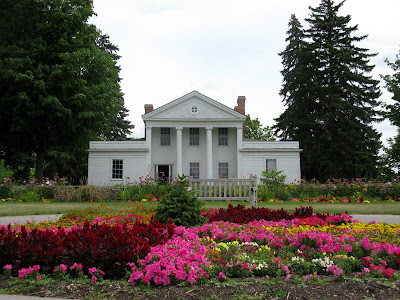 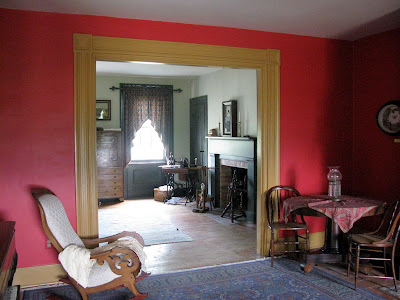 It has been used as a Catholic Diocese orphanage, museum, and in 1977 became a part of Heritage Hill. The building is now listed on the National Register of Historic Places. 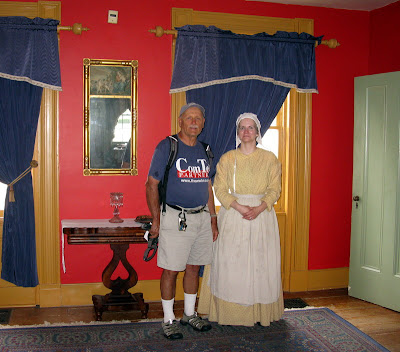 Docent & Bob, Cotton House
As we were leaving, the docent returned from her lunch break, giving us the opportunity to go into some of the previously cordoned off rooms and hear more of the history of the house & its occupants. 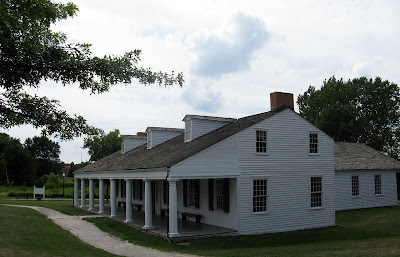 Fort Howard is also located at Heritage Hill. Three buildings are preserved along with a hospital. 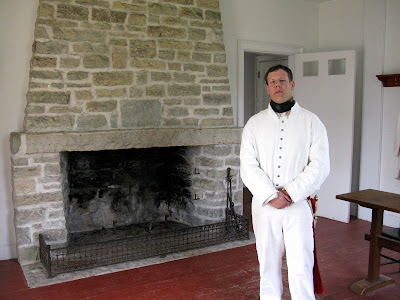 This handsome fellow was anxious to tell his story & show us the weapon of the day. 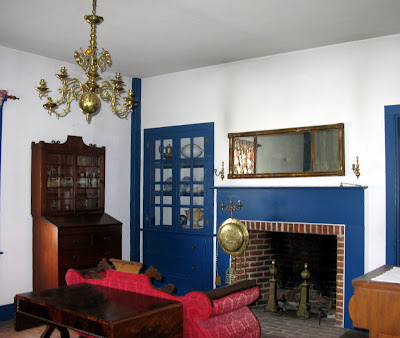 The interior shot shows a brightly decorated officer’s quarter. More pictures are available on our web album for those interested. Check out the link to your right! 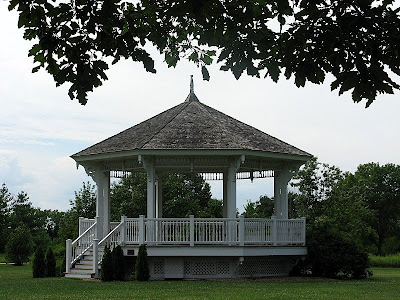 Toward the center of the park I found this lovely gazebo. The literature given to us gives no history of the gazebo; certainly they were and are a common feature in many city parks. 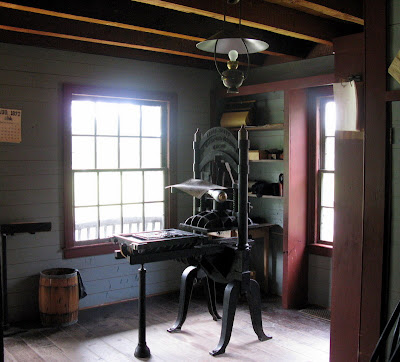 The print shop is one of the most interesting. Here we have a cute docent who let Bob ink the press & printed out a calendar page. 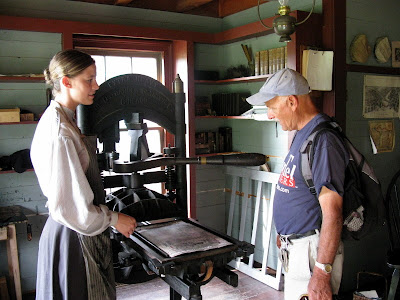 As you can see, the interior was jammed full of original equipment commonly used in the latter half of the 19th century. Yes! Of course these machines still work. All you need do is know how to work, maintain & repair them. 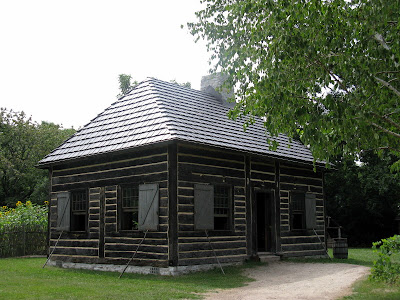 Another favorite is the fur trader’s cabin. Of interest to me is the building was found inside of a house that was being torn down during construction of the Tilleman Bridge. Note the log construction in the French style, of piece-on-piece, or one log upon the other. 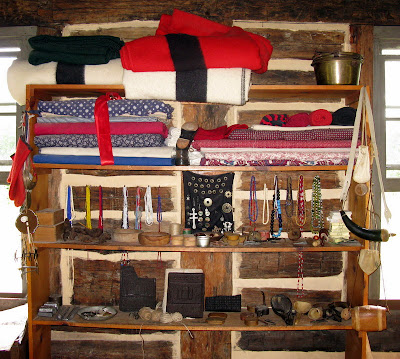 Dana, the docent of the day, does a splendid job of explaining what living in such a building was like. The only source of heat is the fireplace, and many of the furs were most likely used piled on top beds to keep warm. 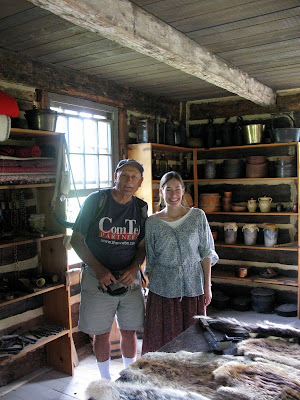 Dana also explained the reason for the short beds was the custom of the day to sleep in an upright position. It was thought to be healthier. 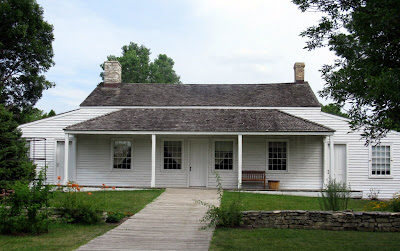 The Tank Cottage is also a fur trader’s cabin, being built entirely of logs, and later sided to have a more modern appearance. 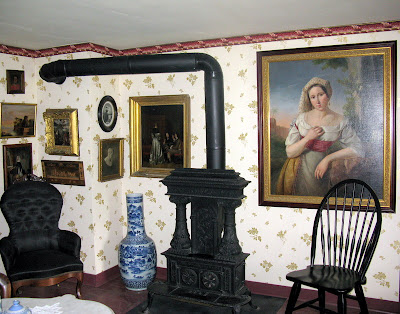 Our docent explains the cottage was originally located on the west bank of the Fox River. Otto Tank purchased the building in 1850 and added the wings to the house. 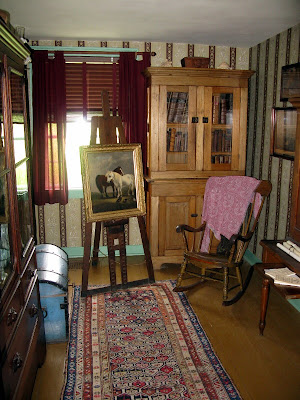 His wife Caroline lived in the house until her death in 1891. Caroline was from a very wealthy family in Holland, and the period furnishings & original paintings exemplify the family’s fortune. 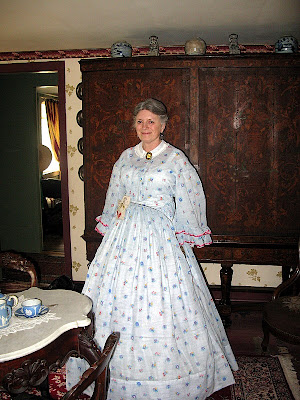 The Tank house is now listed on the National Register of Historic Places & was moved in 1975 to Heritage Hill by barge down the Fox River. 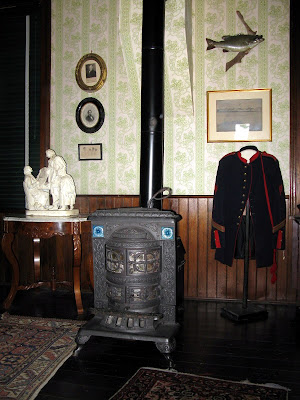 The last stop of the day is at the YMCA Library. Originally located on Chestnut St. in Green Cay, it was built in 1873 for use as a Boy’s Club. 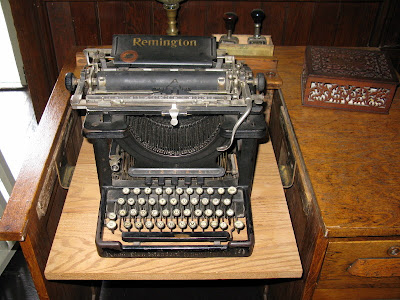 When was the last time you saw one of these?

Mrs. Tank was instrumental in its construction having donated $1,200. Don’t you just love the old Remington typewriter?

Each stop is so interesting; we never get a chance to visit the Belgian Farm, Cheese Factory & several of the other buildings. The docents were probably happy to see us leave! This is an attraction worth visiting again.

For further information visit http://www.heritagehillgb.org/.
Posted by Honey and Bob Shellman at 1:36 PM