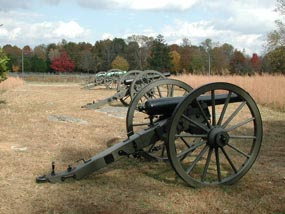 While in Sievereville, Bob had the opportunity to visit the Stones River National Battlefield in Murfreesboro, Tennessee.

Considered one of the bloodiest battles of the Civil War, Stones River cost 13,249 Federal casualties and 10,266 Confederate casualties; a hefty price for a tactically indecisive battle.

The Union armies were trying to gain control of the Mississippi River by driving a wedge through the Confereracy along the railroads running southeastward through Tennessee and Georgia.

Since I was not present, Bob's pictures are presented in slide-show format.

For further information: Stones River
Posted by Honey and Bob Shellman at 4:49 PM