Our next stop is Cave City, KY and a tour of Mammoth Cave. Bob and I have seen many caves, but have never been to Kentucky to see the world’s longest known cave, Mammoth, now a National Park. 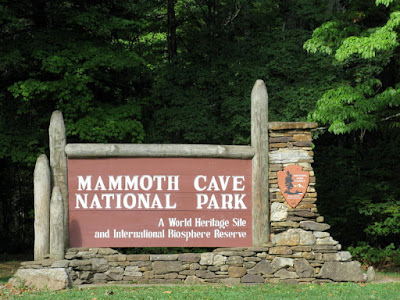 Entrance to National Park
After reviewing all our options, we decide the Grand Avenue Tour, consisting of 4 miles, 670 stairs, and which encompasses most of the other tours being offered, is our best option. 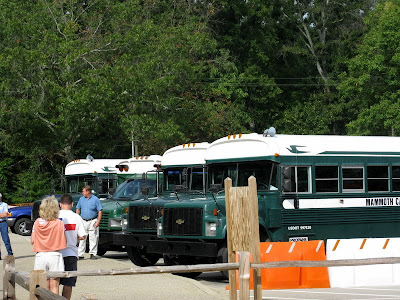 Tour busses wait to take us to the proper entrance
We board the tour bus which takes us to an entrance, although not the natural entrance. We walked to that after the tour. 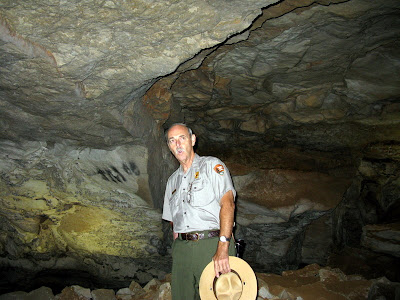 Ranger Bobby did a great job & kept the pace going
Mammoth Cave is the most extensive cave system known, with more than 350 miles of surveyed passageways, and geologists estimate there may be as many as 600 miles of passageways yet undiscovered. 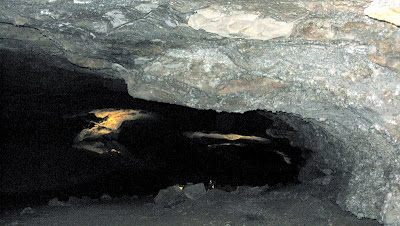 This is what the majority of the cave looks like
Prehistoric people 4,000 years ago knew and used this cave. Like most caves, water and sandstone are the key ingredients. The Green River is the predominate water source.

Our lunch stop. Note the "snow ball" decoration on the ceiling.
The massive size of Mammoth Cave is partially attributed to the vast number of sink holes in this part of Kentucky. 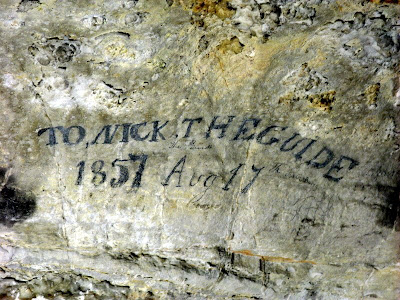 Who would have thought - graffiti in 1857!
In 1926, Mammoth Cave was authorized as a national park and was named a World Heritage Site in 1981. 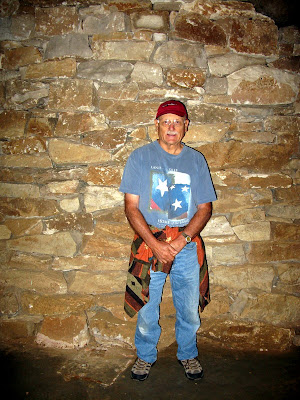 Bob sets a pose after lunch
In 1990, Mammoth Cave National Park becomes the core area of an International Biosphere Reserve. 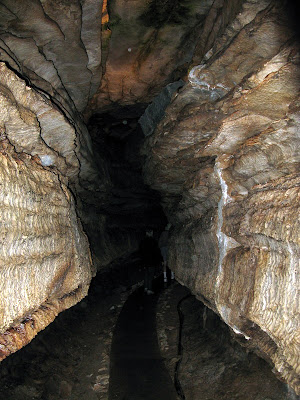 One of hundreds of passageways
Mammoth Cave is today a dry cave, with very little decoration. We stopped for lunch about an hour and half into our tour. Note the “snow Balls” on the ceiling of the dining room. This is the first decoration we see. The vast majority of the cave is gypsum covered walls. 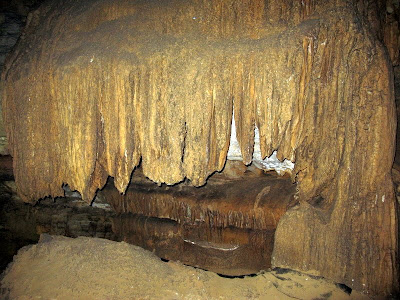 Our first sighting of decoration (other than snow balls)
Since the cave was extensively used throughout history, we saw a fair amount of graffiti. Back in the 1790s, saltpeter, a key ingredient in the manufacture of gunpowder, was mined in the cave. 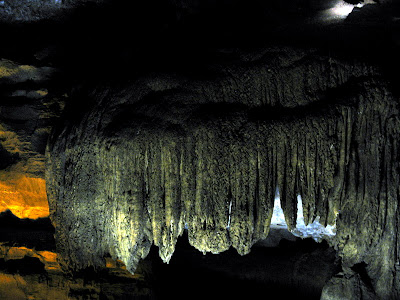 Stalactites
Many white tailed deer & turkeys live in the area. We actually got a picture of one turkey (he wasn’t in the mood to pose) but passed taking pictures of the deer. See the web album! 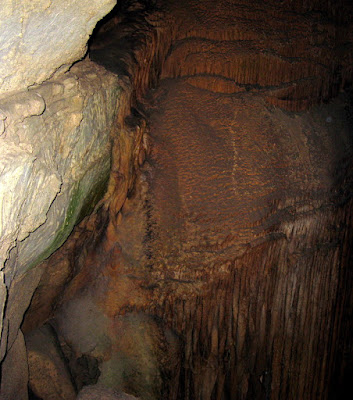 More color
Finally, during the last twenty minutes or so of our tour, we come to the decorated area. Because the decorations are very long, they refer to this as the Frozen Niagara. At a certain angle, it does remind you of a frozen waterfall. 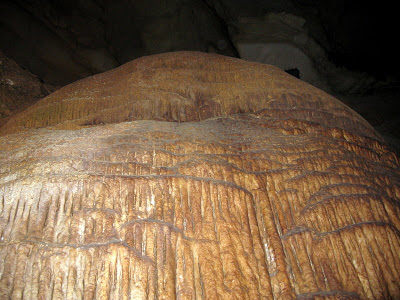 The Frozen Niagara
Here, all the cameras come out. The NPS is very strict as to what you are allowed to take on these tours. No pack packs, camera bags, handbags, diaper bags, etc. Only a bottle of water & camera are allowed. 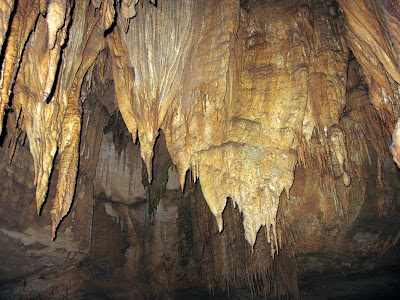 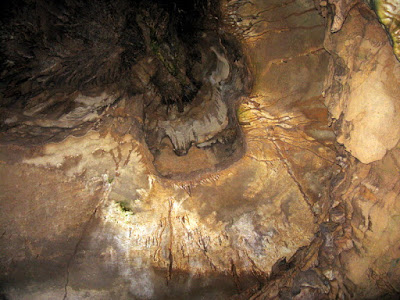 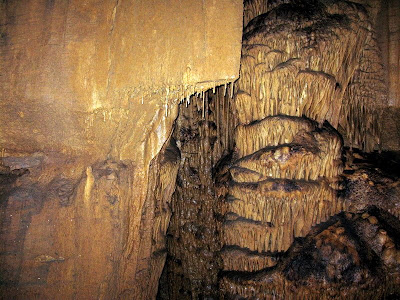 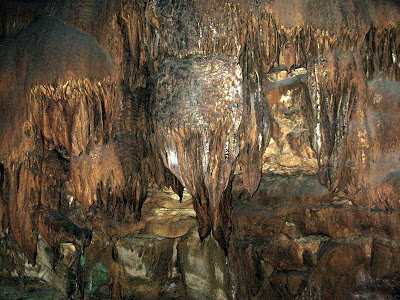 More color
Most of the Frozen Niagara consists of flow stone. There are a few stalactites. The colors, however, are very pretty. 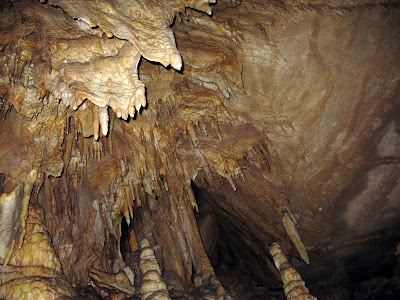 The end is nearing
Soon we come to the end of our tour and find the bus waiting for us at yet a different entrance. It takes about 12 minutes by bus to get back to the visitor center. 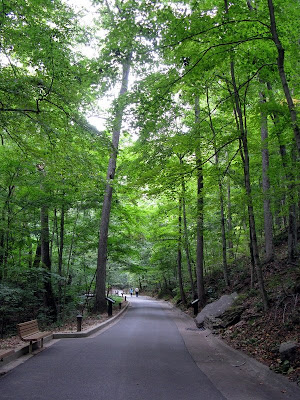 Pathway to the natural entrance
Bob and I take a walk through the visitor center, out the back, and follow this lovely path to the cave’s natural entrance. It was a great experience, and Bob & I are happy we took the tour. (PS: We didn't see any bats!) 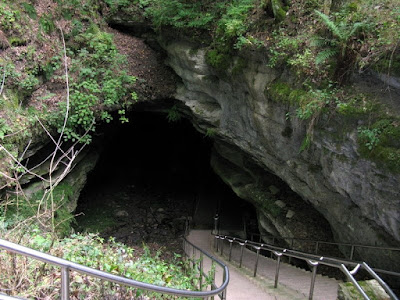 The natural entrance
For further information: Mammoth Cave National Park
You're getting very close to seeing the Corvette Museum in Bowling Green - Straight ahead!
Posted by Honey and Bob Shellman at 5:41 PM

Hi Bob & Honey,
Your pictures and tour of Mammoth Cave are awesome. Hope you had a great time here in Kentucky. Certainly enjoyed having you here at Cave Country RV Campground.