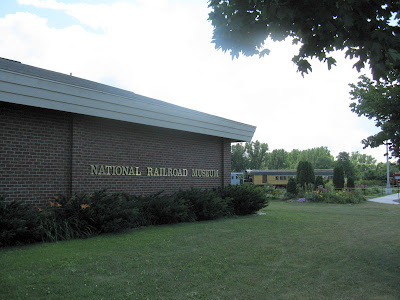 Home of the National Railroad Musuem
Entering the building, front & center is a miniature protected by glass of one of the locomotives at the site where the golden spike was driven when they laid the last rail of the first transcontinental railroad from Saint Louis to San Francisco. 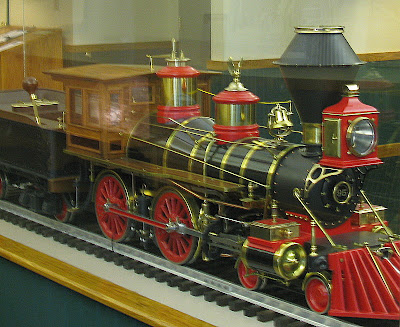 Walking further into the entrance looking up is a series of what the railroads call drum heads, or railroad logos. These are quite fascinating & were used primarily for passenger travel. 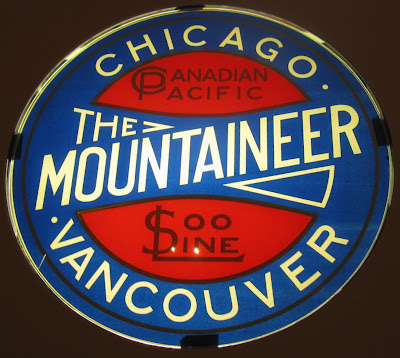 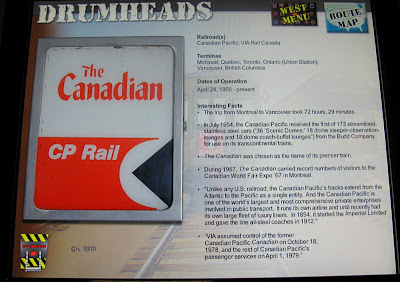 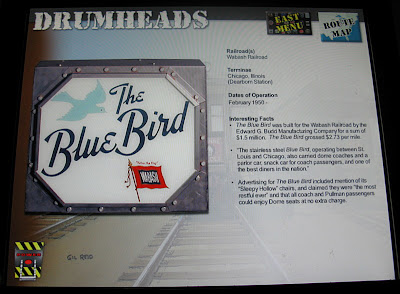 The collections consists of over 40 drug heads

To protect these treasures from weather, inside the museum there are a variety of specialty locomotives, one of which is the General Dwight D. Eisenhower’s World War II command train. 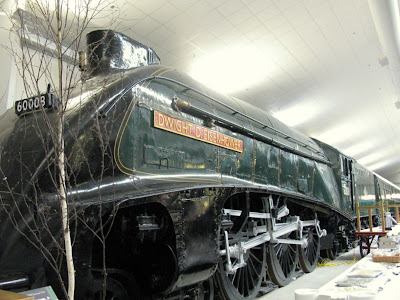 A portion of Eisenhower's command train 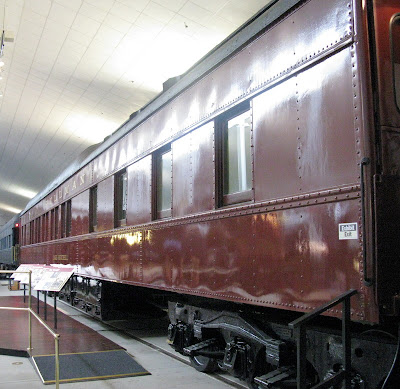 This is a fine example of a Pullman car, used in the 1920s through 1950s as a standard car for extended travel. 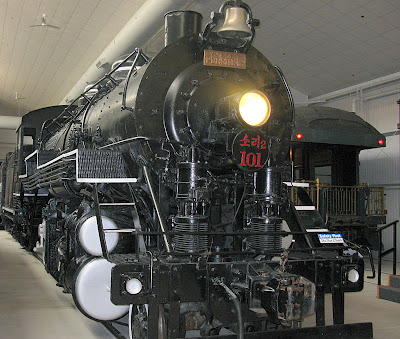 Speciality locomotive
This locomotive is an example of special purpose locomotives. It is a workhorse for short run level terrain passenger & freight travel. 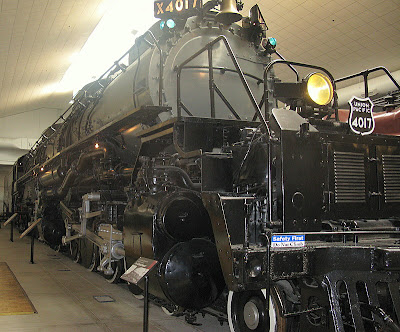 One of 3 remaining articulated Big Boys!
The need for more powerful locomotives was met by the Big Boy, used for longer runs in mountainous area capable of pulling 100 or more freight cars. Only 25 or these locomotives were ever built, and this is one of only 3 existing locomotives. It is about 125’ long, weighed slightly over one million pounds and produced 6,500 horsepower. This is one monster locomotive! In order to maneuver mountain curves, the engine had to be articulated. Due to extreme heat & soot, the engineer had to wear a wet bandana around his face for protection. Even in the winter, temperatures of 130 degrees or more inside this locomotive was not uncommon. Due to these conditions, & the resultant lack of visibility, the engineer memorized the position of the controls so he could find them by feel. 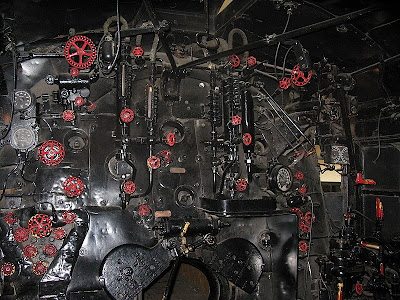 Want to try memorizing these controls? 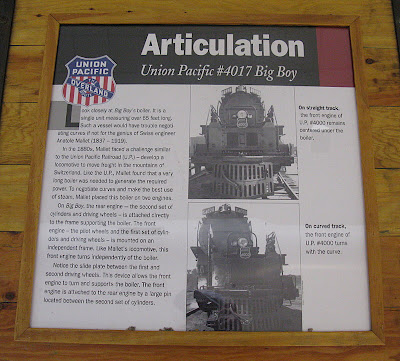 Explanation of articulation or how to put a bend in the engine!

In an open shed outside, additional locomotives & rail cars were displayed.

An example of 3 smaller locomotives
This small locomotive was used in mountainous terrain to haul ore to the main hub where many turns existed. 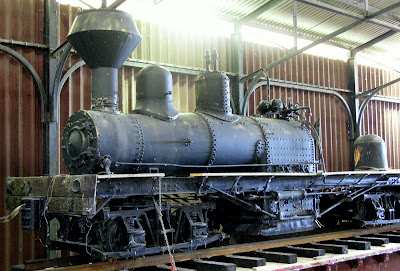 This is an example of the silver dome observation car used especially in the west so passengers could take advantage of the scenery. 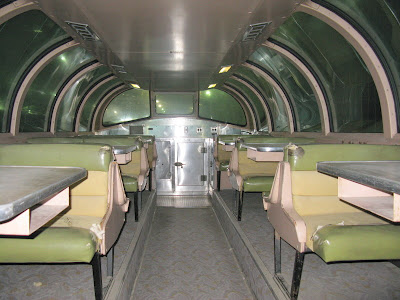 Style & luxury in a by-gone era

Next is a typical club car used for socializing. 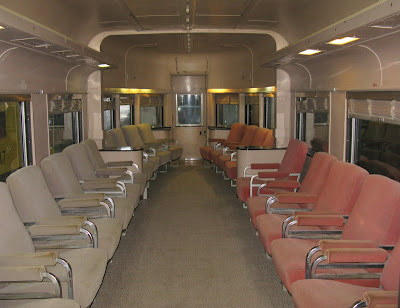 The club car may have been considered the most important car on the train by some!

The following are examples of washstands, the galley, and a parlor car used for sleeping. As you go through each display, there are flat-screened TVs which tell the story of what train travel is about. This compartment showcased the life of a porter & the difficulties of the profession and the struggles they had to overcome.

In this era, all porters were African American’s. They were at the mercy of both the railroad barons & the Pinkerton Detective Agency. It was not an easy life, but was still considered a good job at the time. 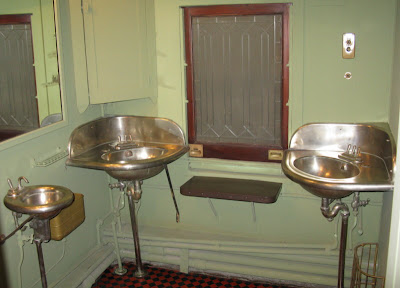 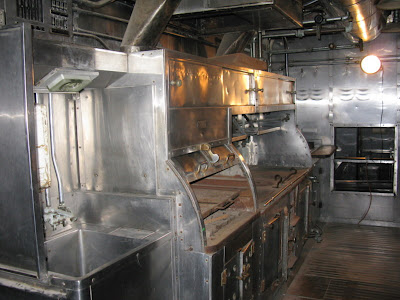 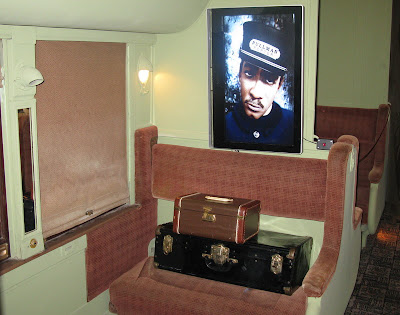 Inside Pullman with video history
As a final attraction to the visitor, you may enjoy a train ride in an old car twice around the facility, about one mile. This gives you a feel of what the railroad cars of the 1930s – 1950s were like. 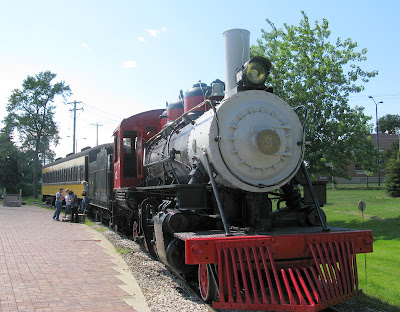 Saving the best part for last - a ride!

The last attraction is an 85’ observation tower to enjoy an overview of the facility, the Green Bay Packers stadium, the Heritage Museum directly across the Fox River, and the maximum security prison on the other side of the freeway. No, I didn’t tour the prison! 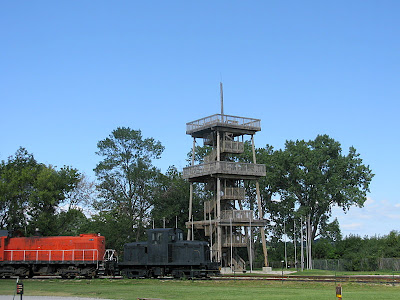 For further information click: National Railroad Museum
Posted by Honey and Bob Shellman at 8:21 AM