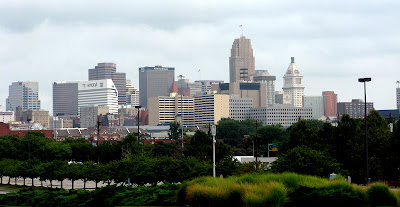 Leaving Port Clinton, we drive south, staying at the FMCA Headquarters on Round Bottom Road in Cincinnati Ohio. 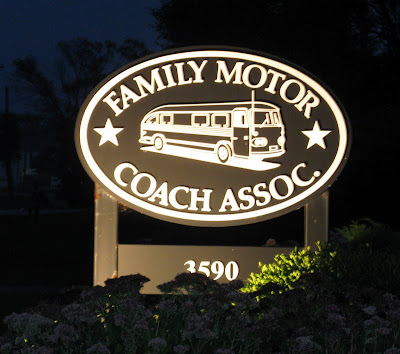 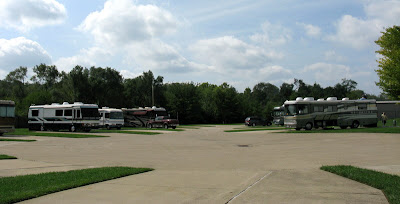 Camp FMCA
We have two days to explore this area, and I am especially interested in visiting the Cincinnati Museum Center at Union Terminal. What an awesome place! I have no idea Cincinnati has so many interesting museums, but if you only have time to see one, this would be it. 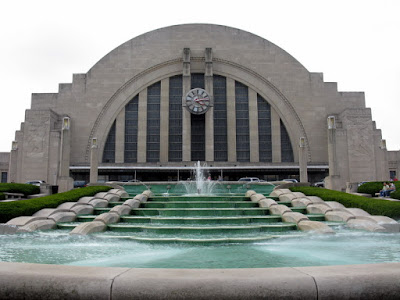 The beautiful Museum
We didn’t think to take pictures of the ramps, but have included a few of the most interesting displays. They made the old Union Train Terminal into one fantastic museum, housing the history museum, museum of natural history & science, Duke Energy Children’s Museum, and an Omnimax Theater. 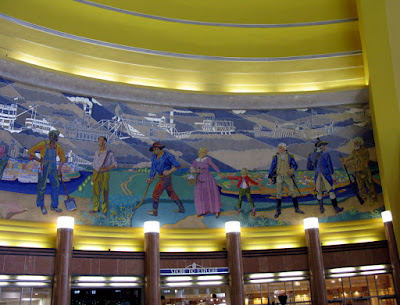 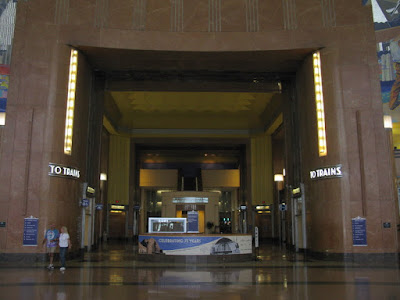 View down the hallway 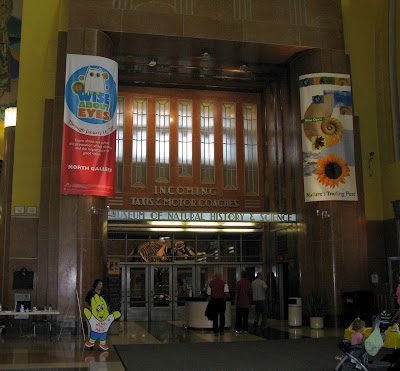 Entrance, Museum of Natural History
For me, the art deco theme is fascinating. These pictures are an attempt to capture the grandeur and scale of a by-gone era. Lacking a wide angle lens, I can only take partial pictures, but I think you will get the idea. 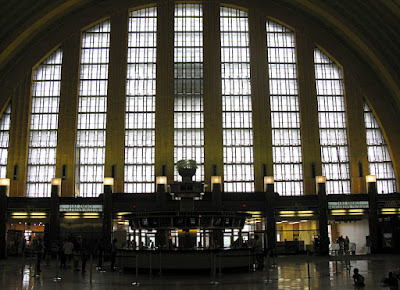 Glorius windows!
When a train terminal, it was configured so that you could drive down to the tracks to drop off and pick up passengers. Today, these ramps take you from the ground floor, down to the bottom, using the ramps as a time tunnel of sorts. 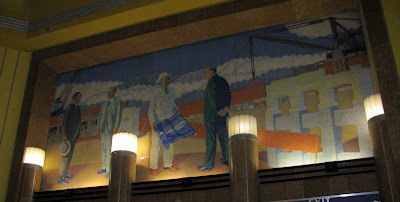 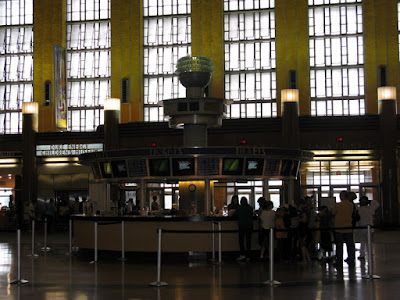 Light highlighting the information booth
The Cincinnati History Museum, we believe, has the most interesting history of a city that we’ve ever seen. The time frame is roughly from the 1900s to 1940s on the top floor, complete with displays (1/64th its actual size) of what the city looked like during this time frame. Every few minutes, the lighting would transition from day to evening. 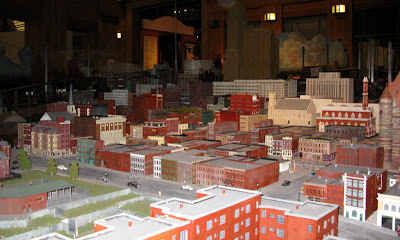 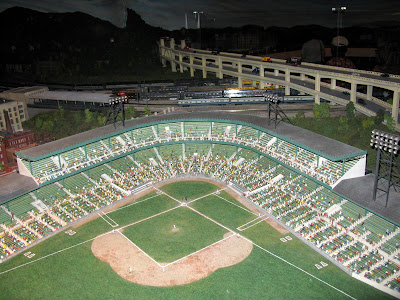 Scale model of stadium
The floor below transitions to WWII, and the effort & sacrifices made by the townspeople. Between 1850 & 1930, Cincinnati became the tool capital of the world. 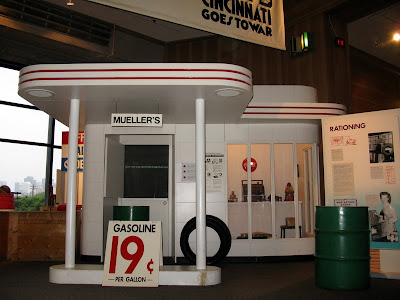 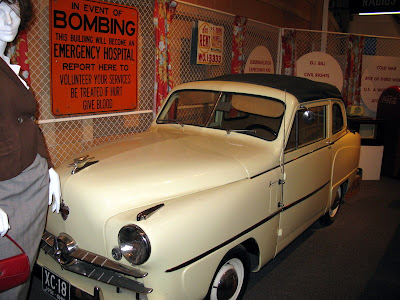 A local inventor's car
The bottom floor displays the earliest part of the exhibit, complete with a re-creation of the Cincinnati Public Landing of the late 1850s, where you can step aboard a 94-foot side-wheel steamboat. They turn the tunnels into “streets” of this era, complete with store fronts & various displays. During this era, Cincinnati was known as “Queen of the West.” 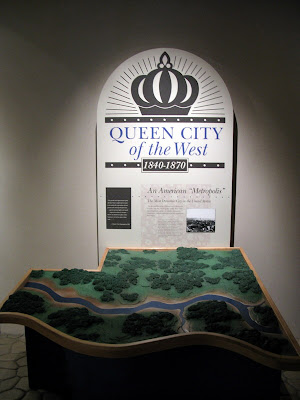 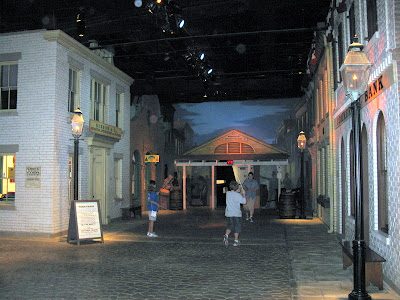 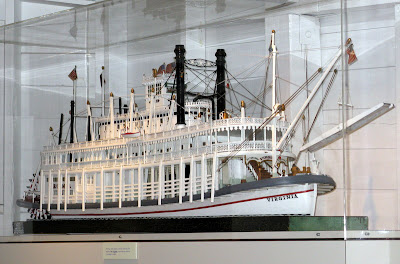 Beautiful scale model of river boat
We failed to get a picture of the sign that told exactly the make & model of this old car, but it is magnificent, as is the tile mural behind it. Please let us know what this is via the comments box below! 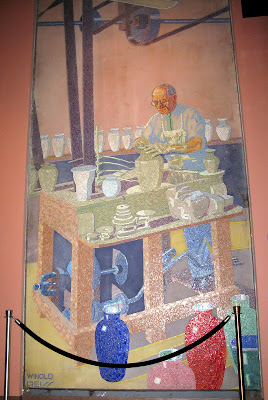 Tile mural showcasing early industry
As we were leaving, the light seemed just right for these final two pictures. 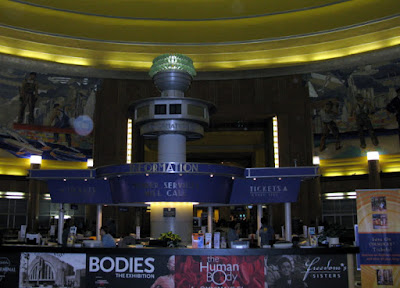 Another picture of the lobby 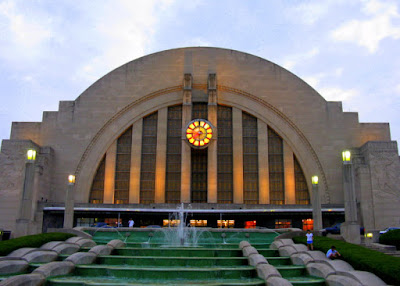 For further information: Museums at Termination Station
Posted by Honey and Bob Shellman at 11:07 AM